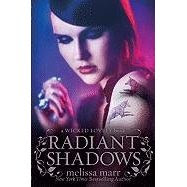 Half-human and half-faery,Ani is driven by her hungers. Those same appetites also attract powerful enemies and uncertain allies, including Devlin. He was created as an assassin and is brother to the faeries’ coolly logical High Queen and to her chaotic twin, the embodiment of War. Devlin wants to keep Ani safe from his sisters, knowing that if he fails, he will be the instrument of Ani’s death.

Ani isn’t one to be guarded while others fight battles for her, though. She has the courage to protect herself and the ability to alter Devlin’s plans—and his life. The two are drawn together, each with reason to fear the other and to fear for one another. But as they grow closer, a larger threat imperils the whole of Faerie. Will saving the faery realm mean losing each other?  (summary from Goodreads)

My thoughts...Once again Melissa Marr whisks readers off to a magical world where the veil between Mortal and Faerie worlds is thin.  She uses her writing talents to manipulate readers into falling for, even rooting for, the characters in the story, even when it's the villain.  Radiant Shadows shifts focus from Aislinn and Seth to Ani, daughter of Gabriel,  and Devlin, the high Queen's Bloody Hands.  The characters were brilliantly written.  I felt sympathy for Devlin; felt his indecision as he is torn between sisters and his own will.  Ani proves to be a very strong heroine.  She struggles to find her place within the hunt and to control the way she feeds.  Ani's strengths are growing as she becomes less Mortal and more Faerie.   We also meet several new characters who help build the story and keep it interesting.

The plot of the series continues to develop strongly in Radiant Shadows.  A large chunk of the story takes place within the Dark Court.  Readers get to ride along on a hunt, listen in on conversations with the old King and the new one, and live through Ani and Tish.  There is a fair share of violence in the form of faerie fighting, romance, and new mysteries.   One of my favorite parts of Radiant Shadows is the introduction of a steed.  I found myself concerned for its welfare and whereabouts.

I stumbled a bit through the beginning of the book.  I would recommend readers to go back and reread the last few chapters of Fragile Eternity before jumping in to Radiant Shadows.  I had to get re-acclimated with the characters, their roles, and relationships to each other.  If you are new to the series, you need to start at the beginning.  Their world is too complex to enjoy without having the background from the previous books.  Fans of this series will not be disappointed with this installment of the series.  Radiant Shadows held a satisfying ending, but it did leave many questions unanswered.  I will be anxiously awaiting the next installment.

Cover LOVE?  Of the four books, this one is not my favorite.  However, in person the cover is really nice.  The tattoo of the wolves on her arm look animated and as usual I love the color scheme.  The cover does a good job of imitating the story.

For more information about Melissa Marr or her Wicked Lovely series, visit her website.
Radiant Shadows can be preordered from popular booksellers such as Barnes and Noble.

If you enjoyed this book, you may also enjoy...
1. The Iron King by Julie Kagawa
2. Wondrous Strange by Lesley Livingston
3. Need by Carrie Jones

*Disclaimer...This book was provided by the author for my review as part of an arc tour.
at 11:20 AM

I really need to try a book by this author. Great review.

Melissa (i swim for oceans) said...

I love Melissa Marr's work, and I can't wait for this book! Great review! :)

I read Wicked Lovely and couldn't get into the next one. But the covers are gorgeous, aren't they?

And I didn't know they were similar to Need and Wondrous Strange. I want to read both of those@!

I want to read this one! Oh, I just finished Fragile Eternity and I can't wait. any. more.

I'm really excited to read this book and your review highlighted all the reasons why. I'm excited for Devlin to get his own story especially. Great review!

I remember when Wicked Lovely first came out, like it was yesterday and now the fourth is nearly here. I really must read the first book soon. Glad to see the series is still good.

ooh, what a great review. I am such a big fan of the books and cant wait till I can get my hands on this one. The cover is great, fits the series.

Great review! I'm looking forward to this and thanks for the heads up to do some re-reading first!

I want to read more of Melissa Marr's books. She captivated from her first book and I can't wait to get to this!!!