YA interview and giveaway: Kate Kaynak

I am excited to introduce you to debut author Kate Kaynak.  Her novel, Minder, officially hits bookstores June 18, 2010.

1. Please tell us a bit about book 1 in the Ganzfield Series, MINDER.
KK: MINDER tells the story of a sixteen-year-old girl from New Jersey who discovers she has special abilities. She also learns that some things are worth fighting for--especially love. 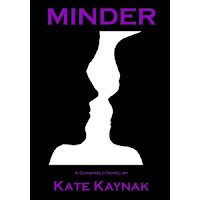 2. A strong heroine makes the story worth reading, please describe your heroine, Maddie.
KK: Maddie Dunn is simultaneously powerful and vulnerable. She's haunted by some things that happen in the book, but she doesn't let her fears hold her back. She's the kind of person who acts fast, but usually with a plan. Most people aren't that important to her, but she'll do anything for the ones she lets get close.

3. You have developed an interesting, but complex world. How do you keep it organized? Are you a post-it kind of girl?
KK: I'm a note-taker. I do use a LOT of post-its (how did you know?) to jot down thoughts when I don't have my laptop handy, but I also create detailed notes, outlines, character sheets, family trees, etc. before I even write the first chapter of a book. Even with all that planning, sometimes the characters decide to take the story in another direction, and I have to follow along. They changed the ending of the second book on me, and I had to re-outline the whole thing before I could continue writing.

4. You have an impressive educational background. Has this, particularly your PhD in Social-Developmental Psychology, influenced your writing?
KK: There's a lot of psych in Minder--I wanted to make the experience of G-positives as realistic as possible. However, I think that my psychology background comes out mostly in the character development. Their motivations drive the action; they influence how they see the world; they determine how they act and react to others. I drew on Elias Porter's Motivational Value System (MVS) to create each person in the series. I may someday develop a writer's workshop that utilizes MVS--it's a wonderful tool for creating realistic and vivid characters! 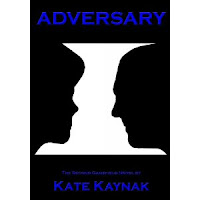 5. I discovered MINDER ends with a few unanswered questions. What do you have planned for the Ganzfield series?
KK: I'm not going to give any spoilers, but ADVERSARY, the second book, takes up a couple of months after MINDER. The ending of MINDER shows Maddie that there's more than Ganzfield in this new world of paranormal abilities. In ADVERSARY, she'll end up over her head in that wider world. I'm currently revising the third book, LEGACY, which continues where ADVERSARY leaves off. I have notes for at least three more books, as well. I try to resolve the immediate plot issues in each book while leaving the major plot arcs open to continue the series. I also try to keep people guessing. While I adored the HARRY POTTER series, after the fourth book I began to wonder why Harry didn't just crawl into his closet in April and hide there until the school year ended. Didn't he notice that Voldemort always made his move right during final exams?

6. You write about people with special skills. Do you believe these people exist in real life? Do you believe in other things supernatural or paranormal?
KK: I'm open to the possibility. There's a fringe area of psychology that studies paranormal abilities like telepathy and clairevoyance. The parapsychology data is mixed; there's no hard evidence either way. That's why my characters need a "boost" to enhance their unreliable, natural abilities--it keeps the story believable.

7. Lastly, what is your favorite way to unwind after a hard night of working? Any guilty pleasures?
KK: Well, I have three kids under five, a part-time consulting job, and three books coming out in the next twelve months. SLEEP is a guilty pleasure!

LOL, I can see how sleep is a guilty pleasure!  Great interview.  Thank you for taking the time to visit us today!

To learn more about the Ganzfield series, visit the official webpage.  You can also find Kate at the following sites: her website, Facebook or her blog, The Disgruntled Bear.  Be sure to visit her blog June 14-18th to be part of the Virtual Launch Party. 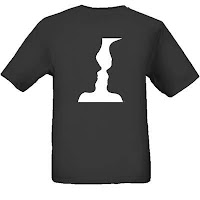 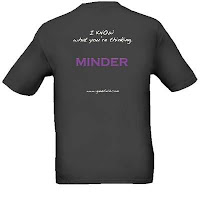 To enter, please complete the form.  Then leave some love for Kate in the comments section. You can gain an extra entry by spreading the word!  This giveaway is open to readers with a US Mailing addy.  Entry deadline is June 18th and I will select a winner with the help of random.org.  Good luck!
at 11:30 AM

Visit Kate's blog for a chance to win an ARC too! Your gonna love this book!

Great interview and pictures! I like the guilty pleasures question.

Kate, you have 3 kids under 5? WOW! They must keep you very busy. Congrats on the book.

I absolutely ADORED this book! I love Kate too and I can't wait for Adversary!

There is a teaser for Adversary at the end of Minder (I am assuming it will be in the finished copy too). It is so good! I can't wait to see what happens next.