Inspired by her experiences growing up in a small Iranian village where child marriage was a common practice, Bidgoli is dedicated to spreading awareness of human rights issues such as child brides, stonings and honor killings in Middle Eastern countries. The pain and suffering she witnessed during her childhood in Iran compels her to write stories to bring hope to battered and repressed women around the world.

The Twisted Path Home follows the story of Arezoo, an Iranian-born professor at U.C. Berkeley, as she works to overcome the devastating scars left by her former husband’s abuse. She is haunted by a terrifying dream of her impending death. Tired and frustrated with lack of progress in therapy, Arezoo tries hypnosis in the hopes of stopping her reoccurring nightmare. While under hypnosis, she begins channeling the dramatic life of Sogand, an Islamic girl living in a village in Persia in the late 1800s, who was forced into an abusive marriage at age 12. The more revealed about the life of Sogand, the more Arezoo realizes that their stories are intertwined... 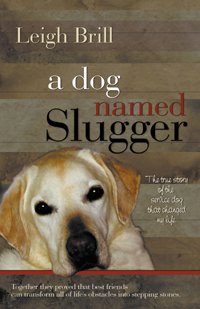 This inspiring true story is told by Virginia writer Leigh Brill, a cerebral palsy suffer who fights a daily battle against physical and emotional challenges.

During her college years Brill nearly gave up; then she was paired with a wonderful golden Labrador retriever named Slugger.

A trained service dog, Slugger not only gave Leigh a level of independence she'd never had before, but also provided a role model for loyalty, dedication and friendship.

With Slugger's help, Leigh finished college, married the love of her life, and became a motivational speaker.

Brill donates a part of all sales to service dog organizations.  Follow this link to purchase your copy.