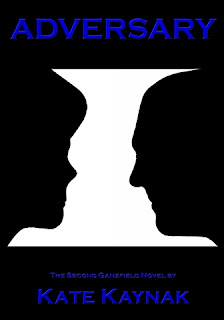 The second book of the Ganzfield series. Things are more dangerous than they seem at Ganzfield, and not everyone will survive. Does Maddie have what it takes? See what happens next in the sequel to Minder.

Read an excerpt of Adversary by following this link to Kate Kaynak's website.

My thoughts...Book two in the Ganzfield series, Adversary, picks up where Minder left off.  This second installment takes readers deeper into Kate Kaynak's world and shows readers the darker side of her writing.

Without giving away any significant events, I will say parts of the book were hard to read.  Not that the writing was less than perfect, but the characters deal with some very trying situations.  The heroine Maddie really steps up to the plate and takes her place as the leader of her group.  She not only proves her strength, but she shows she has the determination, dedication, and spine to protect those around her.

Some of my favorite characters from Minder were still around and Kate also introduces a few new ones.  While I can't say if I truly trusted these new people, they definitely made the story more interesting.  Another pro for me was the relationship between Maddie and Trevor.  Their relationship seemed toned down a bit; less over-the-top.  It seems to have developed into something more mature and stable.

Adversary left plenty of room for the story to continue, as there are still several questions left unanswered.  I am curious about the credibility of several of the characters and I am hoping Maddie and Trevor get their happy ending.

For more information, visit Kate Kayak at her website or the official Ganzfield site.  Book three, titled Legacy, will be out in late January, 2011.
at 9:47 PM

Thanks for reviewing, Elie!

I love Trevor and Maddie! I can't wait for book 3

Glad to hear the romance is toned down a little. They came off as way too co-dependent for my tastes in Minder.